With permission, I have extracted this picture-quote from a website called Jackman's Journey. All rights reserved worldwide.

One afternoon a couple of years ago when Mum was in hospital where she had been admitted after suffering a stroke, I happened to be alone with my father in my room. My father was doing his accounting work in a computer. As for me, I can't remember what I was doing. All I recall was that I was feeling very excited and thus in a talkative mood.

As I engaged my father in a conversation that afternoon we were in my room, I told him that the emotions of food, sex and sleep are the most difficult to control. I am sure my father must have felt embarrassed to hear me mention the word "sex" because it has been a taboo to talk about it in our family. But that was the problem with me - whenever I was excited and in a talkative mood, I tended to shamelessly talk about such sensitive things as sex.

Anyway, I still believe in what I told Dad: that the emotions of food, sex and sleep are the most difficult to control. Why? Because they are pleasant and can lead to disastrous consequences if overdone. For today, allow me to tell you about my struggles with the emotion of sleep.

But in 2007 when I matriculated at the university in JKUAT where nobody monitored me, I began to change my sleeping habits by going for a whole night without sleeping. Then in 2008 while still at JKUAT, I started having trouble with sleep by oversleeping in the morning and late into the day. Since then, I have struggled with the emotion of sleep much in the same way a baby struggles with walking.

I remember in the year 2010 when I went back home after dropping out of JKUAT, Mum used to have me wake up early in the morning to milk cows, a duty I disliked. It used to bother me at having to wake up so early to milk cows in a muddy cowshed. With time, I devised the following trick of making me fill fulfilled, at least for while: I would set my phone alarm to ring at about 1.00am so that when it rang, I would feel happy that I still had like three more hours to sleep. That spoke so much of how I struggled with the emotion of sleep.

Then earlier on in this decade, I developed another sleeping abnormality: I would have nights during which I would be unable to sleep because of too much excitement. I would spend the nights thinking, reading, writing and listening to music as well as speeches in a computer.

Later on after figuring out that going for a whole night without sleeping affected my vitality the following day, I thought the solution was to take sleeping pills to cure the insomnia I had in the nights I felt too excited. So I visited a pharmacy in my home-town of Kiserian with the intention of buying sleeping pills but the pharmacist asked me to produce a doctor's note. Fortunately, I didn't have one, so he didn't sell them to me.

I have said it was fortunate that the pharmacist didn't sell me sleeping pills because eventually, I came to realize that the best cure for insomnia is working hard during the day. A wonderful book I own titled Glencoe Health: A Guide to Wellness, says that physical exercises improve the quality of sleep at night.

A few years ago, I developed yet another sleeping abnormality: I would wake up while it was still dark with a feeling I had had enough sleep only to find out from my watch that it was in the middle of the night. I didn't like that. My idea of a good morning is waking up effortlessly at around 5.00am, not 1.00am!

And I came to discover that the secret of waking up effortlessly in the morning is going to bed a happy man. So, in addition to doing physical exercises, I am thinking that I should develop the habit of reading something inspiring before going to bed at night so that I turn in as a happy man.

As you can see, I have really struggled with the emotion of sleep since my days at JKUAT. But I believe, with God's help, I will overcome and again develop the good sleeping habits I had in the first eighteen years of my life when I was a nice, obedient boy.

In his book Top 200 Secrets of Success & the Pillars of Self-mastery, Robin Sharma advises us to sleep less to make our lives more productive and rewarding. He says that we do not need more than 6 hours of sleep to maintain an excellent state of health. He also says that it is the quality of sleep that matters, not quantity. I will strive to follow that advice. So help me God.

*********************
FEEDBACK: Would you be so kind as to offer your feedback on the stories I post in this blog? Just click on the "Feedback" link on the menu at the top of this blog and share your thoughts with me. Thanks in advance for your comments.

Lessons From My Story-telling Journey 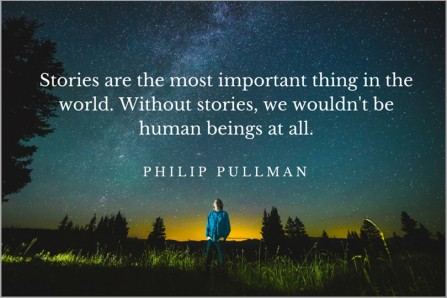 With permission, I have extracted this picture-quote from Jeffbullas.com. All rights reserved worldwide.

Sharing stories has always been the internal force driving me. I love the art of playing with words to create a gripping tale. And my happiest moments these days are when I craft a story that I think is great and someone out there likes it.

I first told a story way back in 1998 when I was in Standard Five to columns of desks in an empty classroom but I enjoyed the experience nonetheless. The story wasn't of my own making; I had heard it on TV.

Then when I got into Starehe Boys' Centre in 2002 for my high school education, I had opportunities to share stories with a real audience. I recollect vividly that year in 2002 as our year as First-formers was coming to an end, I requested our Geography teacher - a likeable lady called Mrs. Mwangi - to let me share a story with my classmates during her lesson. She obliged. Using figurative language, I proceeded to entertain my classmates with a tale I had read in a magazine about HIV/AIDS.

I also shared stories with the whole school during evening assemblies right from when I was in Form 1. When I was preparing to give my first speech in the assembly back in 2002, Rev. Macharia (the teacher who was responsible for approving speeches that students wanted to give), asked me in a sincere manner, "Will you manage to face the whole school?" I told him I would. And I did.

Well, I did often feel nervous as I sat in the assembly hall podium waiting to give a speech but when I stood up to give a speech, that nervousness disappeared like darkness at dawn. I enjoyed standing in front of the whole school to give speeches but some of them were a disaster especially the ones I gave when I was in Form 2 in 2003. Like during one evening talk that I gave that year I was in Form 2, I tried to give the speech without reading it from a paper. Oh my! What I ended up saying was a jumble of incoherent ideas. It made me feel guilty afterwards.

Never one to give up easily, I continued sharing stories during evening assembly as my high school years rolled by. And I got better at it with time. When I was in Form Four, I shared stories with the school about the lives of Albert Einstein and Franklin D. Roosevelt as I had read about them in the 1999 Person of the Century Time magazine. A school-mate called Mulinge Ndambuki complimented me for the speech about Albert Einstein by saying it had been excellent.

And when I entered the institute division of Starehe in 2006 to pursue a Diploma in Information Technology, I still continued giving speeches during Dean's Talk - a weekly meeting between teachers and students of the institute. During the Dean's Talk, I implored the school administration to change its system of administration to match with the technology of our time. If my ideas had been implemented, Starehe would probably still be a great school.

By far, the best speeches I gave during my entire six years at Starehe were the three-day evening talks I gave in January 2007, a few months before I left the institute. I challenged the students to "think like a genius". And then I ended the speeches with a shaggy-dog story that set the whole assembly convulsing with laughter. Afterwards after I finished the talks, a student approached me for a copy of the speeches - a proof that they were truly wonderful.

Although I enjoyed delivering most of the speeches I gave during my Starehe years, I have to admit that I plagiarized them from books, magazines and newspapers. Several school-mates were smart enough to figure out where I had extracted some of the speeches. But that didn't embarrass me at all.

Since leaving Starehe, I haven't had as many opportunities to speak to a real audience as I used to do in the school. Thanks to the internet though, I have been able to carry on with my story-telling hobby by sharing stories in a blog.

I first opened a blog in early 2011 when I was at the University of Nairobi. The blog's title was "Thoughts of a Dreamer". A friend advised me to change that title which I did but eventually, I gave up maintaining the blog. Come 2013, I decided to open a new blog by reverse-engineering a website of Ngishili Njuguna, a blogger I later befriended.

That evening in 2013 after I successfully reverse-engineered Ngishili's blog and made it available online as my own, I felt very elated. Even a lady-friend of mine called Lillian remarked of how good I looked that evening when we met for a choir practice at All Saints' Cathedral in Nairobi.

But what I didn't know back then in 2013 was that I still had a lot to learn about blogging. Like I had to do away with plagiarizing stories from books, magazines, newspapers and websites the way I used to do at Starehe. Then I had to learn to make my stories truthful by avoiding lies and exaggerations. And then I had to refrain from poking fun at other people's weaknesses because I, too, have my own weaknesses.

I have successfully put those lessons into practice in my blogging. These days, I am proud of the story-teller I am turning out to be. And if asked the greatest lesson I have learnt as a story-teller, I would say it is this: if you harbour resentment or are immature in some other ways, those weaknesses will tend to show up in your writing. That's all I am saying.